There is something tantalizing about the visceral reaction of terror. The way the heart thunders, our stomach flutters, and our palms sweat. It is even better when our minds are put to work. I caught up with speculative fiction author, Faryl, and chatted with her about her latest spine-tingling book and her writing inspirations. So cozy up, check out what she has to say, and prepare for those delicious moments of intrigue and fear.

1. Your book, questionMark, contains six short stories. Is there a common thread between them or do they stand alone? Why did you choose to write them this way?

Surprisingly, the answer is both. Each story is a stand-alone piece, so you’re free to read only some of them or read them in a different order if you so choose. However, they do still connect, although not through content or by them all taking place in the same universe (although that’s more up to the individual reader than me). Instead, I tried to make the book as a whole feel like the reader is going on a journey, a pleasant trip from Point A to Point B. As far as what the story of that journey actually is, though … I’d rather let you figure that out for yourself. 😉

As far as why I wrote questionMark that way, I’ve always been fascinated by things like Disney’s Haunted Mansion ride, which tells its “story” through a sequence of seemingly unrelated events and the act of the guests encountering them. Don’t get me wrong–each “event” does have a self-contained story (and die-hard HM fans love figuring out what those are or making their own), some that are more well-known and more well-developed than others. However, the central focus will always be the act of you taking a “tour” of the Mansion, which was something I hoped to replicate in writing questionMark the way I did.

2. What motivated you to write these stories?

Anyone who’s read questionMark who doesn’t know me in “real life” would be surprised to find out that I first wrote most of these stories (with the exception of “The Gadabout,” which I started when I was a freshman in college) in my senior year of high school. Fortunately for the average reader, these stories have gone through an average of about six or seven full rewrites since then, so they’re much better now than they were in, say, 2014.

I had tried to write novels before, but none of them really worked out, or I didn’t have the time or energy to keep them going. I decided to start with short stories instead because they were smaller projects that I could chip away at on and off over the course of a few weeks. And especially during my senior year of high school, which was one of the darkest and most stressful times of my life, a group of smaller projects looked way more attractive than one big, massive project like a novel.

The irony of it all, though, is that the book as a whole took over three years to finish–enough time to write and publish a novel.

3. Does writing energize or exhaust you?

Honestly, it depends on what I’m working on and when. The majority of my writing is done at night (as in, 10 pm to 7 am “night”), since I’m a night owl by nature and that’s when most of my “free time” is. Therefore, it’s even more important that I stay energized in order to meet my goals for that session–and Mountain Dew, Red Bull, and Mickey D’s Sweet Tea can only do so much. A lot of the time, if the words aren’t coming, I might get burned out or incredibly loopy, and that’s normally when I just give up and go to bed. If the writing on its own can keep me going, however, especially during an all-night session, then that’s a really good sign. Basically, if it energizes me enough to sacrifice a whole night of sleep to keep it going, it might do that for someone else, too.

4. How did publishing your first book change your process of writing?

Maybe it’s because I’m overoptimistic, but I see publishing a book as kind of like getting a job. All the hard work you did trying to get the job has now paid off, but now you have to wear the suit and tie every day and continuously prove why you deserved to get the job in the first place. Making the transition from “writer” to “author” was kind of like that since, especially in the process of marketing questionMark, I realized that there was a clear distinction between people reading your work and people paying to read your work. As harsh as it sounds, free stuff is allowed to be terrible since, 99 times out of 100, no major investments went into it. However, there’s a certain expectation that comes with paying for something, especially creative work. You don’t pay $7.99 for a “meh” book, and you don’t hire a “meh” person for a really important job. It’s that simple. So now on top of writing stories that are worth people’s time, I also have to write stories that are worth people’s money, and the difference is kind of hard to wrap your head around at first.

5. What authors have inspired your writing?

It kind of says something when a lot of my literary influences are from stuff I read as a kid. I loved Lemony Snicket’s distinct writing style, and R. L. Stine had a lot of creative and really cool ideas in the Goosebumps books (which one reader compared questionMark to, actually, which was very flattering).

Also, I don’t know if he counts as an author (does he?), but another really big inspiration for my writing as a whole was watching Tim Burton films. I’ve always loved his storytelling style and his ability to combine dark atmosphere and whimsical/childlike tone the way his movies sometimes do.

If all those things helped to develop my writing style, then watching The Twilight Zone in high school cemented the idea that I was going to write short stories. It’s probably influenced and inspired questionMark the most because of its unashamed variety of content.

6. What’s next for you and for your writing?

As far as questionMark goes, we’re in the process of making an audiobook version that should be released within the next month or so. From what I’ve heard of it so far, it sounds amazing, and it’s definitely worth a listen once it comes out.

My schedule’s lightened considerably (although still not by much) since I first wrote questionMark, so I’ve finally started on some novels. I don’t feel comfortable saying titles until I know for a fact that that book is happening (just so I don’t build up a book and then say at the last minute that it’s being canceled–people hate that), but I can say that “Project C” is a collaboration between me and my good friend S.T. Hoover that will probably be next on the list to be published, and “Project A” was originally a story that was cut from questionMark but is being expanded into a novel. There will definitely be more books after that, but those are the two big projects right now and the ones I talk about on social media the most. 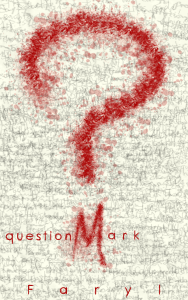 Faryl is an author specializing in psychological horror and dark fantasy. Even from a young age, she was surrounded by the macabre, having grown up with Tim Burton films and books by R.L. Stine and Lemony Snicket. However, her interest in short stories was solidified when she discovered The Twilight Zone in high school. Although primarily a writer of short stories herself, she also has several novels in progress. She currently lives in Canton, Ohio.
farylslair

questionMark is now available on Amazon!