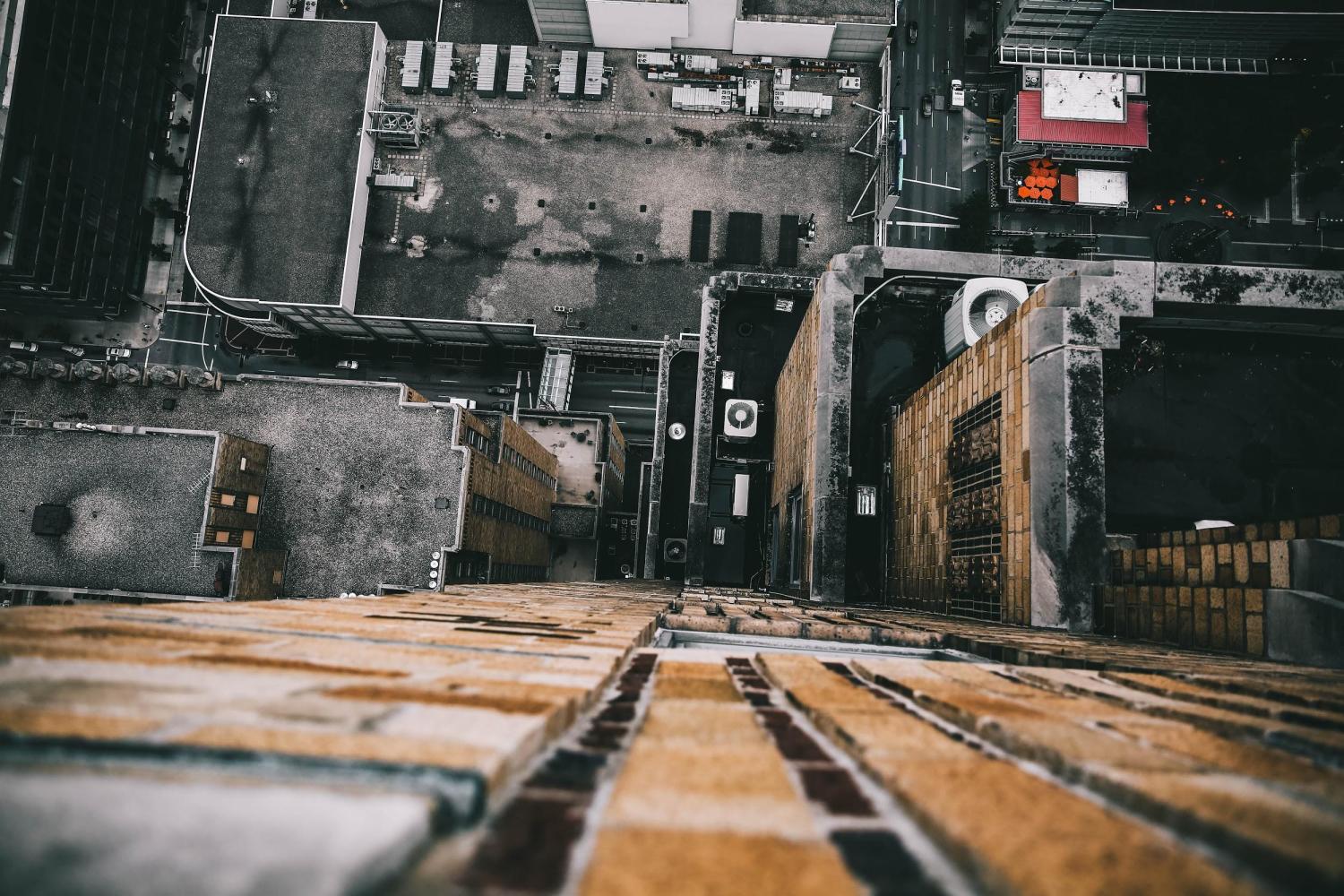 The world is empty.

I don’t know what happened. They’re all just…gone.

It’s not like the movies and TV shows where this sort of thing happens. At least it wasn’t for me. There was no running down the fields of famous sports stadiums or drinking frozen yogurt straight from the machine, no mad looting of high end shops, no juvenile acts of vandalism. Well, I did end up destroying some things, but not just because I could.

There was only panic—pure, blind, sickening panic.

I think I might have run half the length of the city that first day. I don’t really remember very well. I just know I was desperate to find someone, anyone. The animals are all still here. I can’t decide whether or not that makes sense…not that any of this makes sense.

I had been at a party the night before. A typical birthday party full of laughing people…my friends. I talked to my parents the day before that. They worried about me living in the city on my own, but they said they were glad I’d made friends, told me to have fun and be safe. I got drunk that night. I remember that. I took a cab home and passed out on my bed. All normal stuff I’d done before.

A hangover greeted me the next morning, but it was nothing some water and a few painkillers couldn’t handle. I only discovered what had happened because I needed coffee. It was a short distance between my door and horror.

A soundless city is no different than a tomb. The wanton destruction was a cry for help. I would have welcomed being arrested and thrown in jail if only it meant there was someone else around. There was no one. No reaction to breaking glass or blaring horns or triggered security alarms.

When I finally calmed down enough to think about it, I wondered why everything was so…orderly? No crashed cars as far as I’ve found. No fires caused by ovens left on. Why not? Was the whole world in on something I wasn’t? I tried to find out. The Internet still works for now. I’ve sent emails, made phone calls…nothing.

That’s why I’m here now. What’s the point of living if I’m going to be alone forever? A life with…nothing…isn’t worth living. I’ve considered the possibility that everyone might reappear, that maybe this is just some intense, Inception-style dream. It’s been long enough now that I don’t think there’s much hope for that. I drove to my parents’ house. It’s the same story everywhere.

I don’t want to risk suffering. I need something easy and fail-proof. There’s no way I’ll survive this fall.

I thought about leaving a note, but I lost my nerve as soon as I started writing it. A note implies there’s someone that will one day read it. Aliens don’t count. I don’t care if aliens show up here one day and discover an abandoned planet, a mystery for them to try and solve like the Lost Colony of Roanoke Island. The idea that a fellow human being might still be around…that I’m making a huge mistake…it’s a treacherous hope, and hope has become too difficult to bear.

Looking down from this ledge, it’s not so scary as long as I don’t think back to the idea of a note. To fall, to just…lean a little too far and answer the call of the void…

I turn at the sound. It’s a puppy, the one I ran across when I was looking for a place to write my note. She’s some kind of lab or Great Dane or hound. I don’t know dog breeds. I just know she’s got enormous paws and a pink collar with a tag that says Mitzi. She had been dragging a matching pink leash when she found me. I didn’t think puppies were supposed to be skinny like that, so I’d found her some food and unclipped her leash. Weirdly, I was concerned it might get caught on something and trap her somewhere. She’s been following me ever since.

“Go away,” I say, turning back and looking over the ledge again.

Mitzi ignores me, toddling over on those paws that are too big for her. She tries to climb the ledge while I’m standing there, like she thinks there’s some kind of interesting thing on the other side. I immediately pull her back.

Something hitches in my throat, and I push Mitzi away from the edge. I push harder than I mean to. She trips on those big paws, a tangled confusion of legs and whippy tail. I’m suddenly on my knees apologizing. A new thought has entered my mind: what if she tries to follow me?

I know I’m right. I’ve seen loads of them around, set those free that I could, the ones locked in apartments and whatnot. Cats too. Why should they starve to death just because of…whatever’s happened? Even still, I can’t shake the thought, the worry this clumsy little mound of fur will hurt herself trying to follow me. I start to cry. I’m angry that I’m crying, angry I’m second-guessing my plan. It was all going to be over.

I want to be angry with Mitzi too, and I am, but I can’t bring myself to push her away again.

Mitzi tries to climb my chest, to lick my face, pawing awkwardly at my arms. I tell her how much it hurts, how much I miss them all, how it doesn’t make any sense. She’s in my lap now, a jumble of legs and ears and licking pink tongue. Mitzi is still so skinny, definitely skinnier than a puppy should be. I wish I could stop shaking. I decide to stick around for a little while. Just until she’s healthy again, until I see she can survive on her own. She’s just a puppy; she doesn’t know anything yet. Another day, when I won’t have her to worry about, I’ll come back here and finish what I came to do. 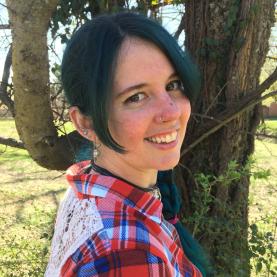 Dana Fraedrich is the author of the steampunk fantasy series Broken Gears, which includes the forthcoming Into the Fire and the Amazon bestseller, Out of the Shadows. She is an independent author, blogger, dog lover, and self-professed geek. Even from a young age, she enjoyed writing down the stories that she imagined in her mind.

Born and raised in Virginia, she earned her BFA from Roanoke College and is now carving out her own happily ever after in Nashville, TN with her husband and two dogs. Dana is always writing; more books are on the way!

You can also connect with her on your favorite social media platform:

Don’t forget to check out Into the Fire, the second in the steampunk fantasy series Broken Gears! 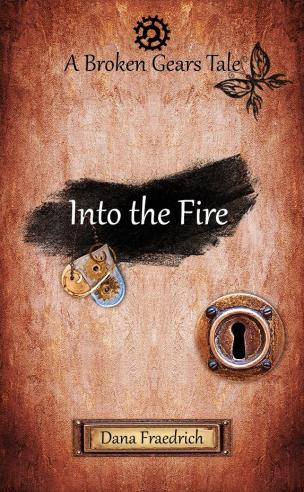 An expedition to an exotic foreign city. An assassin in hiding, waiting to strike. World changing discoveries.

The Springhaven Museum’s expedition to Bone Port is underway! Opportunities await Lenore and her colleagues, but discovery and enlightenment are not all they will find in southern Invarnis. Back home in Springhaven, Rook is searching for answers but seems to find only more questions. Who took out a hit on Lenore? What is Bloodstone? A trail of clues becomes fraught with danger, and the quest for truth might demand a price he’s not willing to pay.

The land of Invarnis is on the precipice of a new age, and the lives of its inhabitants will never be the same again. The pursuit of knowledge is a noble endeavor, but sometimes one must ask: how much is knowledge worth? Some things were locked away for a reason…