Sophocles is our April guest on Read.Write.Repeat! He is a super talented graphic novelist and all around cool human. You don’t want to miss what he has to say during the episode, which aired Sunday, April 29th at Noon!

Q. If not yourself, which fictional character would you be?

Q. Who are your favorite heroine and hero from fiction?

Q. If you could have dinner with any three authors, dead or alive, whom would you dine with?

Q. Do you have a current or “forever” favorite book?

A. I’ve got a few “forever” books but one which never fails me is the Life & Times of Scrooge McDuck by Don Rosa.

Q. Which fictional character would you want to befriend?

Q. What villain from fiction do you love to hate?

A.All the villains that act cruel for the sake of cruelty without any motive.

Q. Tell us about the books in your life that have fed your soul, brought you solace, pleasure, or joy, or eased your mind.

Q. If you could exist in any story world, which would you choose, and why?

A.Existing in the Iliad or an ancient Greek or Hindu cosmogony text/world would be pretty cool because “I” would be a part of the human fabric of deeply ancient cultures. In Philip Pullman’s world because I’d love to have my own daemon. In the Star Wars world because I’d want to be a jedi. In the One Piece story world so I could be the Pirate King.

Sophocles Sapounas is a Greek graphic novelist living and working in Detroit. The first volume (of seven) of his graphic novel series has been released, and he’s currently writing the second one. He has been known to skateboard, travel, play the guitar, and go on misadventures with friends and by himself. His passion is living life to the fullest, and making sure it doesn’t pass him by. He loves his cats, complaining about the weather, and he secretly enjoys being miserable cause he claims “it makes for good stories.”

Check out Sophocles Sapounas’s website, www.notal0ne.com, for the first volume of his graphic novel series Not Alone, which updates every Monday, Wednesday, and Friday.

You can also connect with him/her/them on your favorite social media platform:

Don’t forget to check out Not Alone, and download the ebook if you hate waiting for updates! 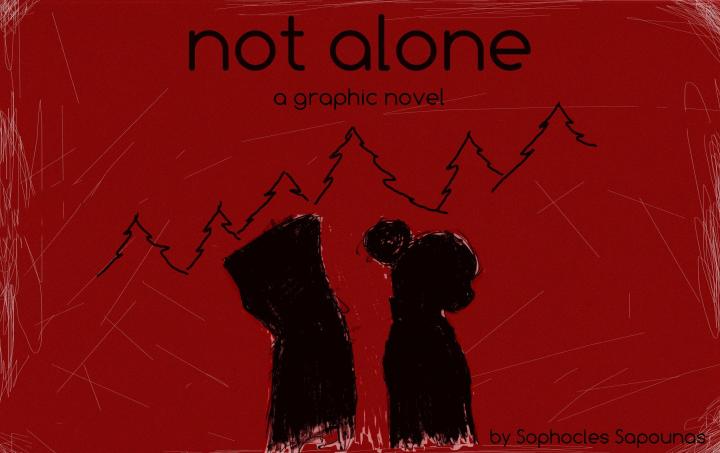 Not Alone is a lofty project I deluded myself into thinking I could make, and then stubbornly refused to let go until it was. The first volume is out, and while my primary vision is a book version, it is too costly at this point in time for me to print. So you’ll have to make do with the webcomic version and M-W-F updates. IF you want to read the whole thing at once, and IF you feel like like paying anywhere from 50 cents to 15 dollars, you can download the entire ebook from the website here: Not Alone: Volume 1