We writers must know more about our story than will ever make it into the pages of a book.

That’s true for characters, plot, and—especially if you’re writing speculative fiction—the setting. Whether you’re conjuring a world for a sword-and-sorcery epic or an entire galaxy for your space-opera saga, you’ll want to spend a lot of time thinking about setting.

For one thing, your story will be a whole lot stronger if you can sprinkle vibrant details throughout. Conversely, if you leave too much of your setting unexplored, readers are bound to fall into the holes you unintentionally leave behind.

Yes, skimming over important aspects of world building can have dire consequences. Best case scenario: your setting is blurry. Worst case: you end up contradicting yourself—and even if you manage to “write around” a problem you didn’t anticipate, you’ll likely end up with a thin, contrived narrative.

So what’s the solution?

Work. Lots of it. But the good news is this can be a lot of fun. Heck, it should be fun because you’re writing about imaginary stuff, a heady fabrication brewing in your own mind. This is why you write speculative fiction. This is unadulterated creativity!

Since we’re talking about creation on a massive scale, it’s best to tame the chaos with a bit of strategy. This is the science behind my world-building exercise: start broad and then narrow in. It’s equal parts research (looking at existing cultures, both real and imagined) and brainstorming (piecing together fragmented ideas through sheer force of will).

I’ve broken down the process into a series of questions in six categories. Let the fun begin!

The environment is the space where your characters will interact. If you’re writing science fiction, it might actually be space. In any case, environment forms the foundation of setting. Whatever you decide here will impact every decision that follows.

The inhabitants of your setting encompass not only main characters, but also people or creatures your protagonists may encounter throughout your story. Knowing your characters ahead of time might give you head start here, but more likely, hashing out your “lifeform options” will give you more choices when deciding whom your tale is about.

Yes, history. Before your eyes start to glaze over, let me assure you that you don’t need to craft a complete timeline detailing every day from Creation to the present. (I suspect some world builders might relish the challenge.) Think broad strokes, for starters.

Not every fantasy or sci-fi story needs to incorporate religion, but since spiritual beliefs guide many people and cultures, their absence could be conspicuous if you omit them entirely. The more civilizations you invent, the more variety is to be expected.

To be clear, I’m using the term “magic” to refer to any supernatural aspects of your story. It could be gods-given spells or amazing technology. (Like Clarke said, “Any sufficiently advanced technology is indistinguishable from magic.”) Magic systems tend to play an important part of fantasy and science fiction, so don’t skimp on the details here!

This category covers just about everything else, and you can get as granular as you wish. However, I highly recommend spending some time ruminating on language, governance, economy, and everyday life—for each culture you’re creating.

You survived the world-building gauntlet! Or you will. The odds are you won’t answer every one of these questions in a single sitting. It took me about eight hours to run through them during a recent world-building exercise. I didn’t figure it all out on the first try. There are still a few holes.

In fact, you probably won’t feel like you truly know your world until you actually enter it and start writing your story. The answers to the above questions—as found in your world-building document—is more like a travel guide than an encyclopedia. You’ll be able to visit your creation with more confidence than if you just popped in unprepared, but there’s still more ground to cover.

Now it’s time to be a tourist. Your first draft awaits.

Be sure to scroll down for info on David Michael Williams books, or check them out on Amazon!

David Michael Williams has suffered from a storytelling addiction for as long as he can remember. His published works include The Renegade Chronicles and The Soul Sleep Cycle, a genre-bending series that explores life, death, and the dreamscape.

Welcome to a hidden world where gifted individuals possess the power to invade the dreams of others. Two rival factions have transformed the dreamscape into a war zone where all reality is relative and even the dead can’t rest in peace. Check them out on Amazon!

The grave could not contain her grief. 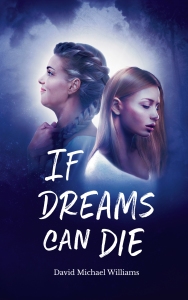 Annette has devoted her life—and afterlife—to reclaiming her departed family, no matter the cost. To stop her from destroying the dreamscape, former enemies must unite and declare war on the so-called Lady of Peace.

But how do you defeat someone who is already dead?

If Dreams Can Die depicts the final confrontation between a death-defying cult and the CIA-sanctioned dream drifters sworn to defend the collective unconscious.

Available in paperback and for Kindle at Amazon:

Check out these other, awesome articles and interviews by David Michael Williams:

Read sneak peeks of other novels in The Soul Sleep Cycle:

Sneak Peek of IF SOULS CAN SLEEP

Praise for The Soul Sleep Cycle

“A blend of sci-fi and fantasy that manages to transcend both!”

“If fantasy, mythology, and a gripping read are what you are after, The Soul Sleep Cycle series is a must read.”

“Lots of twists and turns…definitely not predictable.”

“This is the kind of book that lingers in the back

of your mind long after you finish reading it.”

“A wild ride that kept me guessing

from beginning to end!”

“To anyone looking for something fresh and unique,

“Easily the best book I have read in years.”